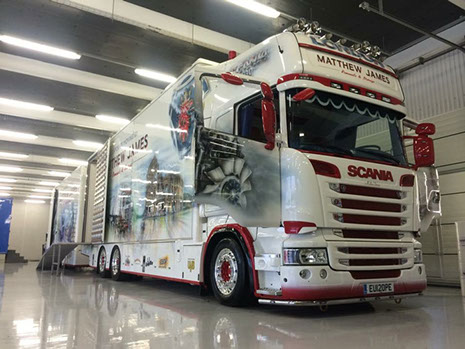 The second year of the Movers and Storer`s show was held in spectacular Wing building at the Silverstone race circuit in the Midlands.

Organiser Animo Events reported a 16% increase in attendance over last year before which was great news for all those involved and meant more visitors would be poised to see the latest edition to the Matthew Fleet.

The show saw senior people from the removals and self-storage industries and it felt like the show had the attendance it deserved even though its only its second year.

The spotless F1 pit area doubled as the arena for the live events and of course the truck show. New machines and vintage vehicles shared the stage and were viewed by the 864 visitors that arrived over the two days.

There was plenty of fun too with a pit stop challenge, where teams could try their hand at wheel changing against the clock, and the ever-popular Packer of the Year Contest.

The show drew to a close on day two and it was finally time to announce the competition winners!

Matthew James Removals won the 2014 Truck Show with its beautifully prepared Scania road train, it was a unanimous decision and another trophy for the Matthew James cabinet.