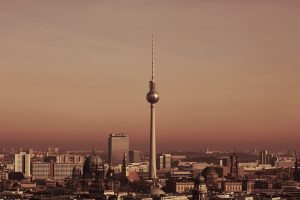 Berlin has steadily become an attractive place for UK expats to relocate to – with its affordable cost of living, fantastic food, rich history and diverse culture, it is easy to see why so many Brits have chosen to move to the lively German capital city.

If you are thinking of moving to Berlin, read our compact guide on what to expect and the most important points to consider.

With a plethora of great museums, restaurants and markets, you will always find something interesting to do on any given day in Berlin. From the infamous Sunday “Bearpit karaoke” sessions in Mauerpark, to the amazing daily bike or street art tours, it’s unsurprising that the city attracts a young, diverse, artistic crowd.

Popular attractions include; Brandenburg Gate, The Reichstag Building, Jewish Memorial, Checkpoint Charlie, and the historically significant Berlin Wall (known as the Eastside Gallery). Residents and tourists alike can also take a trip to Germany’s oldest zoo, which opened in 1844. For a fantastic 360-degree view of the city, take an exhilarating 40-second whizz up the Berlin Fernsehturm, the TV Tower which looms over Alexanderplatz.

And of course, no guide to Berlin would be complete without mentioning the city’s world-famous nightlife! With huge, mega-trendy clubs, attracting some of the best DJs on the planet (and with queues to match), to tiny, intimate dive bars – there is surely something for everyone looking to have a good time after-hours.

Being one of the largest capital cities in Europe, Berlin has many different neighbourhoods to choose to settle down in, each with their own unique characteristics. Whether you are moving to Berlin with children, or are on a year abroad as part of your university degree, we are certain that Berlin has a suitable neighbourhood to match your needs and interests!

For families moving to Berlin, it might be preferable to live in a quieter area, such as Prenzlauer Berg. On the other hand, younger expats or those moving here to study might prefer to live in a lively, trendy area, with a higher concentration of bars and restaurants, such as Kreuzberg, Friedrichshain or Neukölln.

Remember, accommodation in the city is still quite affordable, particularly when compared with London! For an accurate idea of the current cost of living in Berlin, check out this handy overview.

Bear in mind, though, that finding a flat to live in is often very competitive and people may find their search to be much trickier without proof of income or a secure job in Berlin. As such, be sure to provide as much information as possible to the agents in question in order to avoid disappointment.

There are several platforms that can help in your search to find a Berlin flat or house. The biggest and most popular is Immobilienscout24, with new listings being posted every day.

Germany consistently ranks as one of the best countries for employment opportunities, with skilled workers earning more money and working shorter hours on average, compared with the UK. This attracts many new expats from the UK and elsewhere within the EU each year, many of whom decide to build a long-term career here.

If you intend to stay for more than 90 days or are planning to move to Berlin and you do not also hold an EU citizenship, you need a visa or Residence Permit.

You can either: apply for a visa before you travel or enter Germany without a visa and apply when you arrive for a residence permit from your local Foreigners Authority (Auslaenderbehoerde in German).

Perhaps one of the biggest advantages to moving to Berlin is that higher education is free, a stark contrast to the crippling debts may students in the UK and USA find themselves faced with, as a result of paying for university! Students in Berlin will also be happy to hear that there are various student discounts available to them, including housing utility reductions, cheaper theatre tickets, restaurant discounts, and even free public transport in many places throughout the country.

The official language is, obviously, German and although a large proportion of people speak English, it is recommended that you have a basic level understanding of German before you arrive, as most people around you will prefer to speak in their local language. Students studying in English will mostly be okay, but many choose to start learning the language, due to both courtesy reasons, and to make their everyday lives easier.

Likewise, people moving here for work may be able to get by without speaking much German, especially if their company is an international one, whose primary role will require using the English language. That being said, it is definitely wise to brush up on your German language skills if you intend to live here long-term.

Berlin’s transport system is fast, efficient and reliable. With S-Bahn trains, U-Bahn trains, Trams and buses available at all hours of the day and night, you normally won’t find yourself having to wait for too long to travel in and out of the city. The cost of transport is still relatively cheap, with discounts for students on certain lines.

Germany itself is located in a convenient place for international travel, with Belgium, Austria, The Netherlands, Denmark and more, all being less than a few short hours away by plane.

Much like the weather in the UK, Berlin has variable climates, normally categorised by cold winters and warm summers. Summers are usually rather hot and sunny, but weather can rapidly change, so don’t be surprised if you find yourself caught in the middle of a nasty afternoon downpour in August. It is, therefore, wise to carry an umbrella with you in Berlin, no matter what the season may be!

Matthew James removals routinely offer removals to Berlin from the UK and elsewhere in Europe. We are will be able to assist you with the entire door-to-door moving to Berlin process or just part of it. The cost of your removal to Berlin will depend on several factors, including the number of belongings needing to be moved, whether you wish to include packing within the price, if you want to take insurance out with us (highly recommended), and, of course, the distance and route taken.

Do not hesitate to get in contact with us today to discuss your move to Berlin.

Moving to Denmark from UK

Moving to Spain from the UK after Brexit