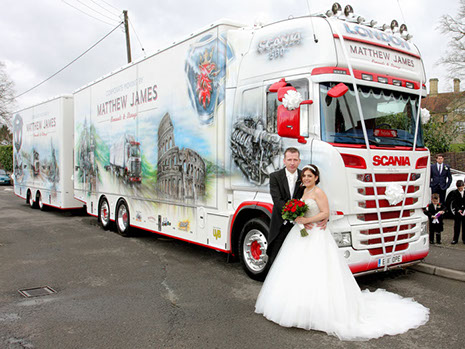 Ten years after meeting his wife while delivering goods for the furniture store DFS where she worked, Matthew De-Machen of Matthew James Removals has tied the knot with long term partner Kirstie. It was a wedding to remember for the family, for the whole team at Matthew James Removals, and for dozens of curious bystanders who watched the elegant bride arrive at church in a top of the range Matthew James road train!

For the massive responsibility of driving his bride to Leybourne Church in early April, Matthew chose experienced driver Daniel, who has been working for Matthew James Removals for five years, but has probably never had such a valuable delivery to make! Driving the distinctive truck from West Malling High Street to the church was no easy task, with many narrow roads to navigate, all while kitted out in its wedding finery, particularly with a trailer on the back.

Many people who know Matthew will know his passion for vehicles, and the road train is one of the pride and joys of his life. It is Matthew’s home from home when he is on the roads in Europe. He reckons that in total he spends around eight to nine months away every year. In just over six months of service, the new Scania has already clocked up 70,000 kilometres and on trips as far away as the Scotland, Algarve, Stockholm, Sardinia, and Gibraltar, covering 11 countries so far.

Matthew and Kirstie once went on a work trip together so that Kirstie could see what it was like. “After experiencing me taking the road train right through central Madrid in rush hour, she now knows it’s nothing like a holiday in the sun,” he told R&S. On and off the road Like so many of Matthew James Removals’ vehicles, the road train is a work of art itself, with the side panels airbrushed with pictures of sights from around the world.

The wedding venue was certainly the centre of attention at the reception at the Michelin-listed bar and brasserie, The Swan, in West Malling, Kent. Many of the restaurant guests at The Swan stayed on after their meals to watch the bride make her arrival in her beautiful white wedding dress in the striking truck; management said that they had never seen anything like it in all the hundreds of weddings that they have catered for.

When Kirstie met Matthew she found him to be “the most professional and friendliest person I had ever met! Little did I know I’d fall in love and marry this man.” The couple have been together for ten years and now have two children together. “When we finally got round to getting married, Matthew’s only request was that I arrived at the church in his road train and of course I was happy to do this,” she told R&S. Matthew now plans to spend five more years on the road before gradually settling down to a more full time family life. “Kirstie knew from the start that my job entails me being away a lot of the time and she has stuck by me all the time,” he says proudly. Congratulations to them both!