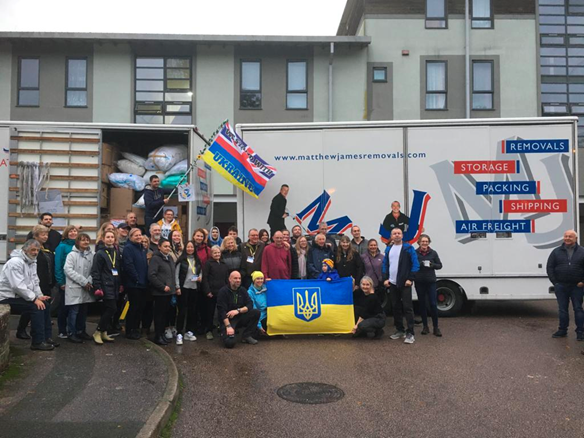 Here at Matthew James Removals, we’ve been deeply troubled by the events which have unfolded in Ukraine this year. Amongst our colleagues we felt a strong desire to look at how we could offer any help and support, and decided to offer transport of aid to Ukraine from the UK. Having established contact with groups in the UK who were collecting vital supplies, we made arrangements to collect bulk loads of aid from those people, and in addition arranged our own collections at our Dartford depot and in local villages.  Through doing this we also made contact with other groups of people collecting supplies.

In March this year we packed a lorry with 10 tonnes of items which we knew would help the Ukrainian people.  This load included food, medical supplies, warm clothing, bedding, toiletries, and animal food and items which would help people to keep their precious pets with them.

A volunteer driver, Mark Phillips, took this lorry through Germany and Poland to a location close to the Ukrainian border and delivered it to a grateful group of Polish and Ukrainian people. Due to legal and insurance restrictions it was not possible to take the lorry into Ukraine, but the people who we delivered to arranged the onward transport to where the items were most needed.

After the success of this trip we felt that we should offer another lorry later in the year to take more aid out to support the Ukrainian people. Having kept in contact with some of the people who we collected the original load from, we were able to offer a larger lorry for this trip, and filled this with around 12 tonnes of goods in November.

As well as many items similar to those on the original trip, we also carried IT equipment such as PCs, monitors, and phones, to assist with communications in the country, and a number of brand-new generators which are vital now that the war is destroying critical infrastructure in the country.

We were also able to load donations received from the team at Kent Community Wardens, who work to make local communities stronger and safer by assisting the elderly and vulnerable, either directly or using their extensive contacts. Some of the items donated were in fact hand-made by the people who the wardens support.

The second load was delivered to a different location on the Slovakia/Ukraine border by one of our regular European drivers, Russell Finch. The Customs and border processes were slightly more complicated than previously but Russell stuck with it until he was able to trans-ship the aid across to a Ukrainian lorry at the border, which then took it on to Kyiv. From there it will be sent to where it is most needed, including as far south as Kherson, which currently is a key strategic location in the ongoing battle.

During the collection of the second load, BBC South East Today came along to film the process and talk to key people involved in the effort, including our own people. This article featured on the BBC News and was seen by many friends and colleagues. We hope that this will help to inspire others to get involved however they can.

We’d like to give a massive vote of thanks to everyone who helped make this possible, from those donating supplies to those volunteering to give up their time to help us. Matthew James Removals covered the full cost of both trips, which amounted to around £8,000 in total.

We are all keeping hope and support for Ukraine in our hearts, and we pray that this situation may come to an end soon.