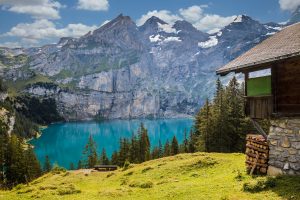 With snow-capped mountains, gorgeous lakes and world-class skiing in the Alps, Switzerland is an ideal destination for people who love to explore the great outdoors. What this country lacks in size, it certainly makes up for in character, with four official languages spoken (German, French, Italian and Romansh) and 26 different cantons making up this tiny country of only 8.42 million.

Living and working in Switzerland

Although Switzerland is not an EU member state, the Freedom of Movement Act allows the majority of EU/EFTA citizens to move there without problems. However, after three months’, you will need to apply for a residence permit and register to work in order to stay in the country. Your employer is required to register your employment, and this can be done at any point up until the day before you are due to start working there.

If you are only working in Switzerland for three to twelve months, you will need to obtain a short-stay permit (L permit). If staying for more than a year, a residence and work permit that lasts for up to five years (B permit) is necessary.

EU/EFTA nationals who are self-employed may also obtain a B permit for five years, as long as they are able to prove to authorities that they will be earning enough to financially support themselves.

It is compulsory for all people, regardless of nationality, who are living or working in Switzerland to take out health insurance. This applies to everyone – even those who are only working there for less than three months.

Once a person has moved to the country, they have a period of three months in which to take out health insurance with an authorised provider of their choice. There are, however, some exceptions to the rule.

For EU citizens who are only staying in the country for up to three months, the European Health Insurance Card (EHIC) can cover their access to healthcare in Switzerland at a reduced cost or for free. However, once they become a resident, they will need to join the country’s health insurance scheme just like everybody else.

Two main types of bank exist in Switzerland: National banks and Cantonal banks. Cantonal banks are generally used only by residents of a particular canton, which often makes it more difficult to transfer money or relocate to another country and still use the same bank. In most cases, the bank will require you to close the account.

It is, therefore, probably better to open a national bank account, which can operate throughout Switzerland. These include well-known institutions, such as Credit Suisse and UBS.

The easiest way to open a Swiss bank account is to do so in-person when you arrive in the country. Simply walk into a bank of your choice on a weekday and talk to a member of staff about opening one – there is normally a person who speaks English and can assist you. You will normally need to bring a proof of identity, residence status (or letter from an employer if you do not yet have residency) and recent utility bill with you to open an account. Once complete, you should be issued with a debit card within ten working days.

As Switzerland is not an EU member state, it is among the few countries in Europe that has not yet adopted the use of the Euro. The official currency in Switzerland is the Swiss Franc (CHF), but many people find they are able to pay using Euros in certain establishments within the major cities, as well as in airports, tolls on motorways, and the federal railway.

Aside from being a breathtakingly beautiful place to live, Switzerland is also a fantastic country to work in, having exceptionally low unemployment rates and outstanding working conditions (hello, four weeks’ holiday per year!). Moreover, following Luxembourg, Switzerland has the second-highest average wage in the continent, making it among the best in the world. That being said, the cost of living is also high.

In Switzerland, you will find many of the world’s biggest multinational companies, as well as other important organisations. This means that skilled professionals may find plenty of employment opportunities, particularly for those in the pharmaceutical, technology, engineering, banking, insurance, IT and financial fields, amongst others. In fact, almost half of all the senior positions in the country are held by foreign nationals.

However, it is a highly competitive job market, so speaking one of the main official languages – French, German or Italian – is beneficial. German-Swiss is the most widely spoken language, predominantly in the central and eastern areas. In the West, French is mostly spoken, and in the South, Italian. English is spoken within the workplace, but knowledge of one of the other languages will certainly put you at an advantage. Other desirable languages for job seekers include Mandarin and Russian.

Around 60% of people living in Switzerland rent their accommodation, as opposed to the 40% of homeowners. This is particularly true for expats, the majority of which will continue to rent there.

As a result, rental costs are high and competition for places to live is fierce. It can take several weeks or months to find a place to live long-term, so be patient, as landlords tend to work on a first-come, first-served basis. As such, getting an application in as soon as possible and ensuring you have all the correct documentation, including a letter of reference from your employer, recent bank statements and a residence permit, is crucial.

The easiest first-step option is to rent a room in a flat share with other people. This is referred to as Wohngemeinschaften (WG), which translates as “residential communities”, in the German-speaking parts of Switzerland.

Whether you wish to opt for a higher quality of living and require removals to Zurich, or prefer a vibrant, multi-cultural city and need removals to Geneva, Matthew James Removals has got you covered. We offer fortnightly removal services to and from Switzerland throughout the year and can cover the entire move or only part of it.

The cost of moving to Switzerland will vary according to the overall distance, method of transport, amount of belongings you have, and if you wish to take out additional insurance (this is recommended).